I was at the Senate today to cover the launch of the #InFairness Movement, a joint project of Spark Philippines and Mr. Click eMarketing Services. This nationwide advocacy campaign, which is supported by Investing in Women, seeks to normalize the role of men at home and empower women’s economic prowess.

After much speculation and people sending me questions on my Facebook account, I declared my 2016 plans on the MarKots show. Marco and Karrots, thank you for making it fun and interesting. Special thanks also to my supporters: Mellow947, Johnoy Danao and Callalily.

May 16, 2011January 5, 20151 Comment
Okay, let me just warn you that this isn’t about the TV show.
I’ve been asked so many times if I am related to Tessa Prieto-Valdes, the fashionable socialite. It’s funny when people I meet for the first time hear my surname NIETO and ask me a Tessa PRIETO-related question. My friends say it’s the smile, others say it’s the aura but heck, wouldn’t it be fun to be her daughter? I mean we’d play dress up EVERY SINGLE DAY!
So for friends who have been teasing me about it, here you go!

July 26, 2010January 5, 2015Leave a comment
Your friendly senator went straight to the Batasan after her Mellow boardwork.

To make up for her being late, the senator surprised everyone with a song number, multiplying herself by 3, hence the name LA FIFA. 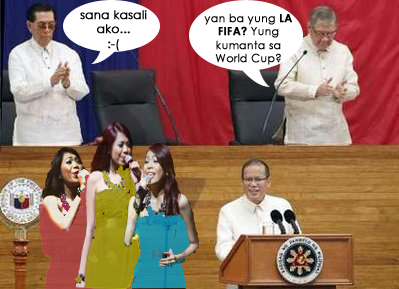 The press caught up with Senator Ingrid Nieto as she made her way out of the session hall. Nieto, just like the senator siblings Alan Peter and Pia Cayetano, was not present at the Senate probe on the Hayden Kho video scandal.

“If there’s any video I love watching over and over again, it’s TWILIGHT and ENCHANTED. I don’t care about those Hayden vids.” replied Ms. Nieto, when asked if she has seen the controversial tapes.

All eyes were glued on TV screens as major networks broadcasted the proceedings. The Senator was at the Lakas-Kampi-CMD merger event, where a lot of big politicians were also in attendance. At the Senate, Senators Jamby Madrigal, Jinggoy Estrada and Ramon “Bong” Revilla Jr. were left to do the probe.

“If you ask me, the merger is more important than the celebrity scandal. Elections are coming up! However, this won’t stop me from airing my opinion over the issue. Girls, you better be careful. Whether you are head over heels in love with a guy, if you have a video (of yourself) in a compromising situation, you better be scared because it’s caught on film. You can trust the ones who are close to you, but remember that in the digital age, it is so easy to hack into systems. Paris Hilton’s email was hacked. We all are susceptible, so take extra caution. Thank you.”

The senator started walking away from us but we pulled her back to ask about her opinion on the “water incident” where Abner Afuang poured water over Hayden Kho’s head.
“OMG it’s a ‘You’re nothing but a second-rate-trying-hard-copycat’ moment. It reminded me of a scene from the play we did just this Sunday. Enid Hoopes, one of the lawyers got her hair permed, and to prove that water deactivates the perm’s ammonium thioglycolate, her head was doused with water and her hair fell straight. Don’t you think Abner Afuang got the idea from that scene?”

Former policeman and mayor Abner Afuang was detained at the Pasay City police office after the water incident on Thursday. According to Chief Inspector Reynaldo Paculan, Afuang can be freed if he could pay P200-P1000.

“Shopaholic? You have got to be kidding me Dan! The only shopping I know I am addicted to is window-shopping! Is a Senator not allowed to do that?”
Kidding aside, it’s me in the pink dress with DJ Alex in crimson red and her sister’s BFFs.

Spot me and DJ Lily! 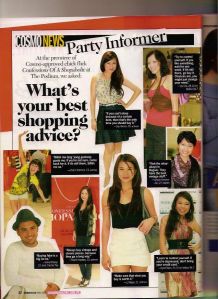