After two years of driving Carly, her parts started to break down one by one and I had to make that decision to part ways with her. I did the final batch of repairs & put her up on sale but it wasn’t that easy. Even that was a process that built my faith & character. This is the story of how I said goodbye to Carly and welcomed Monsour, my brand new car.

If you live in Manila, it goes without saying that the terrible traffic is no stranger to you. On a non-traffic day, it would usually just take me 30 minutes from my place in Makati to Ortigas. On a regular traffic day, that 10-kilometer stretch would take an hour and a half to two hours. Imagine my frustration when it took two hours from Magallanes to the Ayala Tunnel and another two hours from there until Ortigas. It was so strange because it didn’t rain that day, I left at 2pm, there were no road closures or whatever and when I checked Waze, there weren’t any accidents on my route at least.

On regular traffic days, I usually prepare my playlist of songs so I can do my vocalisation and practice in the car. It does work–I mean I get to entertain myself. But during that four hour stretch, naubos playlist ko. Pati Podcasts ko played na lahat, nasa traffic pa din ako. 😦 Anyway, here’s one of them random driving days when I thought of doing Princess impressions. Enjoy!

I’ve been to Pico de Loro thrice. All those times, there was someone else driving and I’d be on board a much bigger vehicle. When I found out that my supposed companion couldn’t make it to the trip, I braced myself to drive alone to the wedding I was hosting. I checked Google Maps.

Two hours and thirteen minutes or two and forty? Not so bad, I thought. I’ve spent longer on EDSA. I still checked Waze for the step by step directions but I think my trip stretched on to three and a half hours. 😦 Check out my driving adventure, the wedding, a quick tour of Pico de Loro and the creepy, dark drive from Pico de Loro to Manila. Congratulations to Mark and Nix!

Finally got my car’s aircon fixed!

When in traffic, instead of getting all irritated (which happens naman to me no, I’m a normal person), try to make light of the situation by doing a traffic report for…JESSICA SOHO!


Please give the video a THUMBS UP and SUBSCRIBE to my Youtube channel! 😀
February 26, 2011 IngridNieto.Com
I’ve skipped writing about some driving days but I’ve been driving the car on my own for almost a month. I’m thankful because I think there’s improvement and my heart no longer beats like I’m being chased by a rabid dog. I don’t experience much trouble with gear-shifting and my foot and leg muscles are getting used to the whole primera and segunda balancing.
Tuesday this week, I took the car to the service center for the first oil change and preventive maintenance check-up. As I sat there submitting the papers for verification, I couldn’t help but recall the many times Carly made me nervous on the road or at home. One time, I was driving from Mellow when Carly’s gears malfunctioned and I was right smack in the middle of freaking EDSA!
I flicked my hazard lights on, turned the engine off and turned it on again after a few minutes just to give the transmission a kick. I was able to wheel her into the Petron gas station near Polymedic and got in touch with my friend Jonats. I asked him if he knew of a nearby car repair shop and he referred me to one right behind [or was it beside?] the hospital. I asked the Petron gas boys for assistance, but since that branch was just a refilling station, it had no service bay or a mechanic on call.
Maintenance for old cars can be a pain and I’m admittedly not the most patient person when it comes to car repairs. Most of the time, I have engagements before or after my radio show which means I can’t always stay in the casa or car repair shop to keep an eye on what the mechanics are doing.  I am fully aware of the fact that there are opportunistic mechanics who would tell you a certain part needs to be replaced when in reality, they’re taking the good parts from your car and replacing them with old or faulty ones. There are also some that fix your car’s problem, but slightly damage another part of your car without your knowledge so that you’d go back to them and they can milk money out of you again.
Speaking of which, I’d like to share my bad encounter with CENTENNIAL AUTO SERVICES, INC.
I just finished hosting an event at the Venice Piazza and was ready to proceed to a movie premiere at the Mall of Asia when Carly just didn’t start. My dad was out of town then and I had to think of the best solution on my own. I figured I’d take the cab and have the car towed home. Since that was a rainy weekend and it was getting dark, my options were limited. I got hold of Centennial’s number and arranged for the towing. Andy, the guy who picked up, informed me that they actually have a repair shop too. Since I was desperate, I thought it would be okay to have the car towed to the repair shop and I’d go check on her the next day since it was also in Makati.
The car was brought to the shop safely and I was able to sleep soundly, although late.
I called up but was told that they were closed on a Sunday and I had to wait till Monday.
The next day, I rang them and asked for an update. The Centennial employee who picked up said that my car was already being diagnosed. So I went to Mellow, called them up when I arrived, and surprise, surprise!
The mechanic who checked on my car [still recalling his name as I write this] said that the starter solenoid needed to be replaced. I asked my co-worker about it, and he said its that part in the starter that sends the electric current for the engine to start. Mr Mechanic told me to call him up again, because he already sent people to go and check on the prices of the parts at Evangelista. 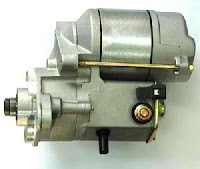 Later on, Mr Mechanic said that my starter needed to be replaced! So from just the solenoid, to the whole thing and he was charging me P3600! I asked my guy friends if that was how much a starter really costs and my co-worker Jaypee said that it was too much. I asked him to talk to Mr Mechanic and since he knows more about cars than I do, he was able to get the real details from the sneaky mechanic. 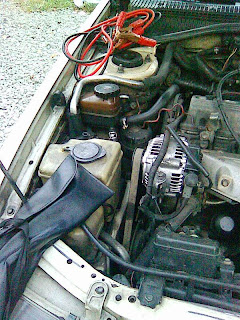 Turns out, my car’s engine WOULD START with the help of jumper cables connected to another vehicle’s battery. So, the problem wasn’t my STARTER, but the BATTERY as advised by my co-workers Jaypee, Drew and Mr Tzing. The mechanic said he could get me a battery from their supplier but after his sly diagnosis and charging, Jaypee told me that it’s better that I take my car to a shop that specializes in batteries. Good thing there’s a Motolite store near my place. After that conversation with Jaypee and Sneaky Mechanic, I told Centennial Auto Services not to replace anything in my car and that I’d pick it up on the same day. Given that, I didn’t have to pay for anything, except the towing and diagnostic fee.
They got Carly running after a jumpstart and I was able to drive her to the battery shop. I told Jojo [the dude in the battery shop] what happened and he said that the problem wasn’t the starter. He checked on the battery and true enough, it was up for replacement. The process was so quick and what do you know, Carly started right away after the battery was installed!
The bottom line?
MY STARTER WASN’T THE PROBLEM AND IT DIDN’T NEED TO BE REPLACED.
So yeah, that was a long story but you get what I mean.
Lessons learned:
With Monsour, I’m thankful that I only have to comply with the preventive maintenance schedule, take care of my car and of course, drive properly! 🙂

How about you? Any bad/unpleasant encounters with shady mechanics? Tell us your story by leaving a comment! Hope to hear from you! 🙂

#ColorConsultantReacts: #ColorAnalysis fun on the beautiful #LizaSoberano
Snaps before all my students arrived for Self-Presentation classes. 😅 This session focused on skin care, hair styling and daily make-up. (latepost) Happy weekend!
Knowing how to get the most of colors is something stylists do instinctively but being able to explain the why and how something works is often the realm of the image consultant.
#ColorConsultantReacts: #ColorAnalysis fun on #KathrynBernardo today.
Thank you, Dapat Alam Mo (GMA7) for the color analysis feature! 💗
Pink is the color of romance, kindness, and femininity, even though curiously it started off as a color for boys.
Me: Love, let's take a pic. 🥰🥰🥰
Prints, patterns and skins have images associated with them.
In case you're wondering, it's a scarf. 😅 Used it as a top because it's huge enough to be draped, twisted and secured. 💚🧡💜
Loading Comments...